Old Christ Church is probably Laurel’s best-kept secret. The locals know all about it, but the hordes of vacationers traveling up and down Route 13 have no idea that they’re within walking distance of a beautiful wooden chapel that has changed little since it was erected before the American Revolution. Located next to Chipman’s Pond, at a quiet wooded corner a mile or so east of the highway, the church and its ancient graveyard have lingered for generations, virtually untouched by time. And this is not one of those historical sites surrounded by fences and “keep out” signs; the public is invited into the magnificent structure several times a year for special services. I attended one such service this morning, and thoroughly enjoyed the sensation of stepping into the past. 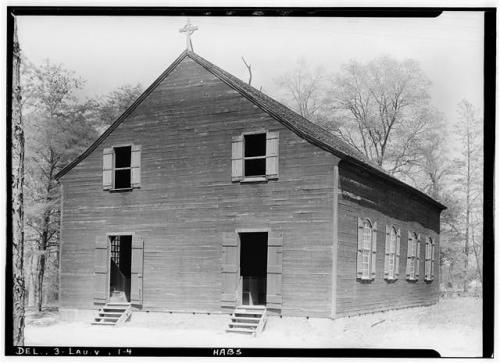 The church’s history is well-documented. It was built by Robert Houston, a wealthy shipbuilder and Presbyterian, between 1771 and 1772, and was originally known as Broad Creek Chapel. Houston was also the previous owner of the lot. At that time, the area was claimed by the Province of Maryland, and landowners were required to pay taxes (or tithes) to the established Church of England. The new “chapel of ease” at Broad Creek offered local parishioners a more convenient house of worship than the relatively distant mother church of Stepney Parish, located in what is now Wicomico County. The church’s subsequent history is summarized in many sources (including my incomplete and unpublished history of Laurel), but there’s a bit of a mystery concerning the history of the location prior to 1771.

In Scharf’s (pronounced Scarf’s) History of Delaware, published in 1888, contributing writer Rev. Benjamin Douglass mentioned an intriguing possibility: “We are inclined to believe that [Christ Church] was not the first building erected on this spot. Tradition points to a prior structure, of which none now can give us any exact information.” Some researchers have dismissed the suggestion as just another of the many errors in Scharf’s works, but I’m not so sure. There is no known evidence of an earlier Anglican chapel at Broad Creek, but another denomination was active in the area 25+ years before Broad Creek Chapel was built: the Presbyterians.

Is it possible that Old Christ Church stands on or near the site of a forgotten Presbyterian church?

Some possibilities to consider: